January 06, 2008
I watched the New Hampshire debates last night. What struck me on the Democratic side was the extent to which the candidates stuck to their positioning. Three of the candidates have clearly staked out their territory in the mind of the voter.

What do the Democratic candidates stand for in the mind of the voter? 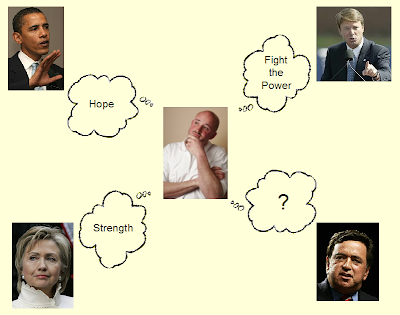 Barack Obama stands for "hope" in the mind of the voter. Last night, he repeatedly used words like "empowerment", "getting beyond cynicism", and "bringing people together". The notion that he is an agent of change is an undercurrent of this theme. He wants voters to think he can change the divisive nature of decision-making in Washington into a more inclusive one. His being a fresh face strengthens this message. Voters perceive the usual faces as partisan squabblers that can't accomplish great things.

John Edwards embodies a "fight the power" mentality. He is the populist of the group, and he spoke of battling special interests, lobbyists, multi-national corporations, and "forces of the status quo". The story of his blue-collar father and grandparents working in the mills, and his fighting insurance companies as a trial lawyer, supports this theme.

Hillary Clinton has projected "strength" as a candidate. Her more muscular stances on foreign policy, her statesmanship and experience, and her claims to be a doer and not just a sayer all contribute to this theme. She did not consistently stay true to her positioning in the debate. There were moments in which she responded forcefully to Obama and Edwards with a "let's get back to the real world" message, but she also tried to claim to be an agent of change. This claim distracts from, and may actually undermine, her "strength" theme.

What single idea does Bill Richardson stand for in the mind of the voter? It was difficult to tell from last night's debate, and I suspect his poor standing among the remaining candidates has a lot to do with his failure to position himself clearly.

Great analysis, and the visual is one of those "hit you over the head with the idea" diagrams. Love it when something makes a concept resonate like this.

It hits me at a visceral level that this would be a great analysis to do for a product - not just in crafting a message that "works best for what you have" but also to reverse directions and say "here's a message that would work - what do we need to add to the product."

Thanks for sharing this!

Roger L. Cauvin said…
Just an update that the visual in this blog entry was the first iteration of a type of diagram that I now call a "competitive mindshare map". It's a visual way of applying the principles of Ries and Trout to position a product.
Wed Feb 11, 12:19:00 PM 2015

Use Case as a Black Box

July 01, 2010
You may have heard the ( apocryphal ) Henry Ford quote: If I'd asked customers what they wanted, they would have said "a faster horse". Over at the On Product Management blog , Saeed gives his take on this infamous quote. He "hates" it, and gives some compelling reasons. Saeed is spot on in his explanations. Personally, I think the quote is great, but it's a matter of interpretation. The valid point of the quote is not that it's a bad idea to facilitate a conversation with your market to better understand it. The valid points are: You must ask the right questions to get valuable answers. You must interpret the answers thoughtfully - often outside their direct meaning - to glean reliable information. Asking questions is not always the best way to "listen" to your market. (E.g., sometimes pure observational studies are more reliable.) Nonetheless, I find the quote is helpful to combat "armchair product management" in the
11 comments
Read more