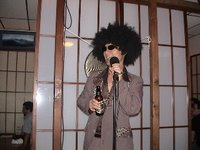 Some Austinites know about DK Sushi; others don't. The Korean/Japanese restaurant opened more than 11 years ago, and it has almost a cult following of loyal customers. The restaurant is very successful despite the fact that not all of the Austin masses are even aware of its existence.

How has the restaurant achieved this success? Not through advertising. I've lived in Austin for 32 years, but I didn't even know about the restaurant until a year ago. The restaurant has no sign indicating its name and is located in a small shopping strip. The restaurant's marketing success has stemmed from the word of mouth generated from its good food and the personality of its owner.

The owner, D.K., dons a seventies outfit every Monday night and leads the restaurant in karaoke, interspersing the amateur musical performances with his own verbal raunch and sexual innuendo. On these special nights, he (or his alter ego, "Sushi Pimp") will spare no woman lewd or demeaning comments as they enter the restaurant. After D.K. gongs a karaoke performer, he downs a sake bomb with them.