November 17, 2006
One of the most useful tools for explicating the terminology of customers is a conceptual model. Conceptual models depict the concepts in the problem domain and their relationships.

At Cauvin, Inc., we compose conceptual models in the form of static structure diagrams. Conceptual models resemble glossaries (in that they define the words in the domain), but they are richer and more concise.

Here is an example of a conceptual model: 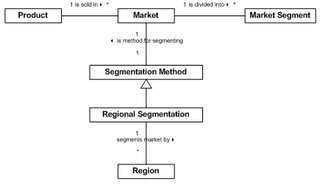 Conceptual models in this format contain the following elements:
The example diagram thus directly implies the following statements:
Building a conceptual model helps a product manager understand the language of the customer. The process often exposes inconsistencies or inefficiencies in the terminology that a product manager can eliminate by explicating the concepts as she composes and refines the diagram.

Anonymous said…
While I appreciate how the diagram outlines the relationships, a UML diagram may be a challenge to communicate conceptual models depending on your audience.

The most effective conceptual models that I have seen/used were simplistic in communicating the business model (compelling/viability) at the highest level. If I am trying to communicate with a development team, it might be more intuitive.

While I would probably not use this format, I think it does a great job outlining the relationships between the entities.
Sun Nov 26, 08:44:00 PM 2006

Putcha V. Narasimham said…
Conceptual model has many similarities with "Concept Maps" and "Class Diagrams" which should be more appropriately called "Inter-Class Diagrams".

To startwith simplified graphic models (diagrams) are helpful but they should be extencible to express higher complexity with precision and rigor. Otherwise, the initial documentation looses correlation with design / implementation details. Currently UML 2.0 Diagrams are OK but extensibility is yet to evolve to reduce the gap between the diagrams and the software that gets developed. I understand that "Executable UML" aims to achieve this.

Roger L. Cauvin said…
Putcha, I am not optimistic about the prospect of reducing the gap between conceptual models and software design. The purposes are quite different. The purpose of a conceptual model is to fully understand the concepts in the domain. While understanding concepts is an important prerequisite to designing software, concepts do not generally map one-to-one to classes.
Sun Nov 11, 07:56:00 PM 2007

Dave said…
Ontologies form the basis of the Semantic Web. They also represent the xml means of encoding a conceptualization.

Once you have your terminology done, you are ready to move the conceptual model to UML.

Concepts may look like UML, but there is a leap between them.

Programmers diverge from requirements. They deal with language constraints, APIs, design patterns, and things that move them away from the use of resulting software.

UML diverges as well. It has to diverge to deal with programmer considerations.

Putcha V. Narasimham said…
Roger: I am coming back to it nearly 7 years after because of your recent prompt.

How long it takes to reduce the gaps is one aspect but I see the very purpose of UML or any such language is to reduce the gap between the concepts and their representations. Text is considered too elaborate but not precise enough. So we find that a lot of math, drawings, diagrams, simulations, come in different combinations. The key is to reduce the gap formally so that it becomes executable.

Putcha V. Narasimham said…
I do not have a site of my own but I have uploaded a few PPTs and PDFs to slideshare.

Those who may be interested may take a look at

This is on the basics of relation...